I love my time spent outside, and the further from human impact the better.  It's a commonly joked observation that once you leave the pavement in National Parks you leave the hoards and throngs of vacationers with lots of questions about WiFi behind.  And honestly, I can't pass judgement about the WiFi, I've been guilty of seeking those invisible tethers before and have done some silly things for faster streaming.  (Sitting outside of a closed Grand Basin visitor center, charging devices and surfing the web, while eating ice cream and cooking dinner in the parking lot.)  But I still do love my wilderness areas and the limited markings of mankind. 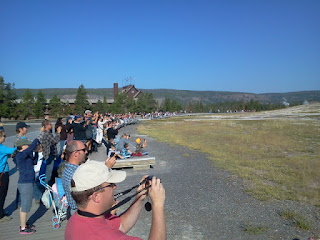 Remember to look at the geyser, not just your screen...

Yet very rarely, if ever, am I the first person to lay eyes on such an area, as I typically follow a trail or a route previously recorded.  Lands traversed and mapped, trails designed and carved from the unique form of the lands.  Fire rings suggesting the most ideal places to camp. But these areas still manage to evoke a feeling of solitude and an amazingly small feeling of being a human alone in nature with only the fewest items necessary.  For me that's the huge draw of hiking, and it really comes down to the camping part.  I really like camping, and I prefer camping in challenging places, pushing myself to get there, and I savor the feeling of solitude that there might not be a human being or structure within miles and miles from where I lay my head for the night.  And maybe this area has been traveled to before, but has anyone slept in this exact spot in the history of the planet?  Has anyone climbed the shortcut to the ridge? Have these trees sheltered others from the rain?  Are my footprints the first to touch this rock? These big thoughts lull me to sleep at night while watching the deeply stained Milky Way across the sky and more stars than any city dweller can imagine. 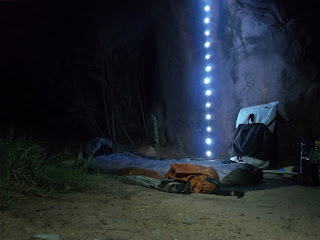 Camping in the Grand Canyon below towering walls

I know I'm lucky every time I get to have this experience.  Of being outside, of rising and falling with the sun, of pushing my body hard physically, of sleeping and eating as nurturing and healing. I really do appreciate the ups and downs, as those are the features that make up hiking, one is not better or worse than the other, they coexist. Some climbs are hard, some descents are too.  But there is always a reward, even if only the satisfaction of having done it.  You see the land through wiser eyes, scouring rock faces for hints of a trail, standing on ridges and aligning your map with the distant peaks, traveling with intuition in areas along the way. You learn to develop a relationship with the trail and the wilderness, as you know the laws and rules are Mother Nature's, and she doesn't negotiate.  It's this kinship that is so important: have respect for the land, and weather, and wildlife, and the wilderness can be a wonderful escape into a world without human intrusion. 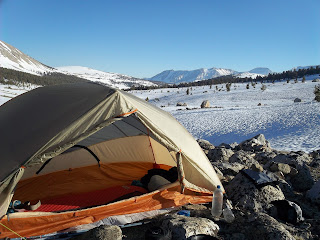 Remember that time the Sierra had snow?

But dammit.  Pack your trash out.  I can't tell you how often the sight of trash in the middle of a trail is the one piece of evidence left behind that humans were there recently.  Or partially burnt trash in a fire pit.  Now I have to pack out some partially burnt, potentially moldy, bug filled trash.  And I do pack out trash I find when it's feasible.  Huge kudos to these two guys that removed over 1,000 pounds of trash from the AT.  They even packed out a mattress!  Now I understand, the AT is often very close to roads, not making it a true wilderness, and there's probably a 99% chance that mattress belonged to someone other than a backpacker using the shelter.  But still, when it was brought and left in the woods, where did the previous owner think it would go!? There is no trash fairy that follows you around sweeping things up.  There are no street sweepers or public servants that are tasked with following you around in the woods to carry your trash out.  You carry it in, you carry it out. 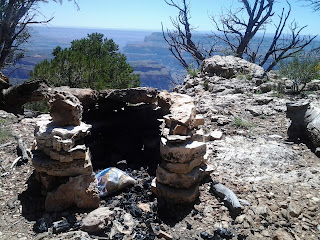 Who found this North Rim of the Grand Canyon spot nice enough to camp there, but ugly enough to leave behind partially burnt trash?

Now I completely understand that trash sucks to carry at times.  Lots of little wrapper corners and sticky residues.  Some poor meal planning and you end up with 5 day old tuna juice soaked trash.  And do you crush those beer cans and risk tearing your only empty, thus highly coveted, ziploc? Or leave them whole?  Or leave them behind?  Please don't leave them behind.  Beer cans seem to be the biggest culprit in the backcountry, and without pointing fingers, I'd guess they belong less often to hikers and are more likely associated with backcountry travelers on other transportation modes, horses, snowmobiles, atvs and even trucks, but hikers drink too.  I know beer companies advertise lives mingled with adventure and beer drinking, how about include a note about recycling your cans when your done at that bonfire in the woods?  Did you know the "Budweiser Can Flower" is the unofficial state flower in New Mexico along the Continental Divide? But hikers are certainly suspects in the partially burned Mountain House foil packets that litter backcountry sites.  Once the consumables are consumed, it gets lighter; you packed it in full, now you're lucky it's empty! You brought that 12oz can of liquid America out here, you can certainly get that significantly lighter empty can out.  Some states will even pay you a nickel for it. 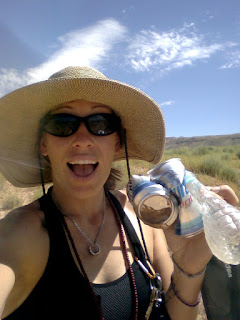 Now I admit, trash has certainly escaped from my pack before.  Those moments when you look down and realize that your Kind Bar wrapper seemed to slip from your unzippered hipbelt pocket.  Or the doublejointed elbow move to get the pesky tag from your GU pouch in a water bottle pocket fails. I've even left water bottles behind at camps before.  It happens.  I'm guilty of it just like any other hiker, but when I see those objects left behind by others, I snatch them up and pack them out without much of a second thought, and I hope that trail karma exists and my trash gets the same treatment.  It's hard to believe that multiple half-burned Mountain House pouches just ended up in the firepit by accident though.  Those are the bonehead moves that frustrate me.

I've spent a lot of time on public lands this summer.  I bought a parks pass that covers entry fees to federal lands, and I've gone to national forests and other sparsely managed lands that allow for recreating beyond the generator-humming campgrounds and pavement. These are my public lands to explore, along with everyone else if they want to.  The western states offer endless dispersed camping areas where you can camp in solitude.  There are no water or electricity hook-ups, and there are no services, but there is the opportunity to feel small.  It's our responsibility to keep these places sacred and pristine and packing out our trash is a great start.  Keep that dirt clean! 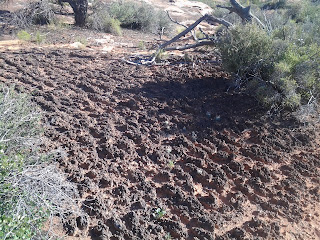 Oh but hey, here's a cool way to help keep trails clean be barely lifting a finger! Michelob Ultra is hosting a "Superior Trails" contest in which the two most voted trails will receive $25,000 dollars grants.  With a couple of clicks (you must be 21 to enter the site) you can have your vote counted for the trail of your choice.  I am a strong believer in the Continental Divide Trail, and personally knowing the diligent worker bees behind the scenes, I know $25,000 would go a very long way with them.  The other trails are no less deserving, but the CDT is a huge trail at nearly 3,000 miles, and receives a fraction of the attention and support that other trails with greater local populations receive.  This grant would do amazing things to continue to improve, maintain, and support this growing trail community.  You can vote daily, and it really only takes a few clicks, help the CDT win!!! Vote here: http://superiortrails.michelobultra.com/
Posted by Annie Mac at 7:40 PM