I've been on road and adventuring for almost a month now, but this trip has been in the back of my mind for the better half of a year.  Many month ago, my father called me up asking for advice, a rare change of situation, as typically those calls go the other way.  He had been considering joining his brother-in-law and nephew on a Grand Canyon float trip and he wasn't sure about committing.  He knew the right person to call to get a resounding "YES" from.  I was so on board with the idea that I immediately looked up the company and checked prices to see if I could go to.  It was well beyond my "vacation" (real life) budget.  But I told him that he needed to go, that the opportunity to go down the Grand Canyon is a once-in-a-lifetime trip that he should experience, everyone should experience, and hopefully one day, I will experience.

Flash forward a few months and a few more emails asking questions about what gear to bring, advice to stay cool, and other insider tips I had outsourced from experienced friends, and he was on his way. I had always hoped I could rendezvous with him on the river, but the more I looked into it, the harder and harder it seemed.  I bought the maps, talked to friends, and lowered my expectations, but I figured that if I didn't try, my chance of success was 0%, but if I tried, it would be a little higher.  As he was riding on his transport from Las Vegas to his river put in at Lee's Ferry, I emailed him a few cryptic messages asking about when his group of boats might hit certain river markers.  Thankfully one of the guides was able to decipher and I got a simple response back suggesting a 17 mile range for camping the 3rd day, then the potential for day 9 being near Deer Creek.  On any long trip, the fuzzy details get fuzzier the further from the start, so to aim for day 9 was a huge window, but being the best shot I had, I figured I would just try, and cross my fingers.

As I wandered through the Four Corners region of the US, I worked closer and closer to the Grand, and the hotter and hotter it got.  Having slept on the ground outside of a backcountry permit office before to secure highly sought after permits, I was nervous about the potential of not even getting an option of trying, but as I showed up as the doors opened at 8am, I was politely informed that it's too hot to hike in the Grand this time of year, and if I was up to the challenge, I could have any permit I wanted.  After some dialogue with the ranger, and proving my hiking cred and worthiness, he helped create an awesome itinerary for me that was strenuous, but was going to be enjoyable even if I missed the boats.

I played Grand Canyon tourist for the rest of the morning, checking out some incredible North Rim views and getting some last minute electrolytes.  I drove over to my trailhead and proceeded to sit in the shade for two hours, as temps were in the triple digits and I was not eager to take off.  Around 4pm, I hoisted my pack, deployed my Mylar umbrella and headed over the canyon rim.

It was insanely hot.

But it was stunningly gorgeous, and I had a gallon (8lbs!) of water with me, so I slogged on.  Thankfully, it was all downhill.  After about 7 or 8 miles, I came to the most incredible waterfall, Thunder Falls, ripping out of a crack in the side of a huge sandstone wall.  I immediately threw my pack on the ground, stripped my sweat soaked and crusted clothes aside, and ran into the water.  It was frigidly cold, and I screamed from shock and joy, and because it just felt right.  I was informed there would be no one else in the area, so I relished in the solitude.  I drank readily from the cascade, enjoying cold water to rinse my sticky mouth.  There's just something about desert spring water that makes it the best tasting water in the world.

As it was starting to get dark, the deep canyon walls cutting away the setting sun, I continued my hiking to get to my campsite with enough light to set up and enjoy my surroundings.  I found the site I was assigned, and there was a huge boulder under which was a great spot to lay my ground cloth and sleeping bag.  When there's no reason for a tent, I avoid sleeping in one.  I rinsed my clothes in the creek nearby, started dinner, and enjoyed the stars as they emerged in the canyon sky above me.  Sleep came easy.

Not wanting to waste much time in the morning, I was up early with the sunlight, before 6, and made myself a cup of tea, had some breakfast, then packed up camp and was on my way.  I hiked down river, inching closer and closer to the Colorado, traveling on glorified animal paths cut high into the canyon walls. With each layer of rock a new challenge was presented to drop to the one below, and in some sections the trail was so narrow that any slip on the loose rock would send you on a bloody and thrilling ride, with no certain ending.  Picking my steps and lines carefully, I worked my way to the Colorado River, getting my first glimpse of the silty water as the canyon walls were glowing from the eastern sun.  I immediately glanced along the river, halfheartedly hoping to see a group of dory boats, or any boats along the river.  I had guessed that I might see other trips and could ask if they knew where my father's trip was, since only two companies run the river commercially in dories, or traditional hard-sided boats.  Spying nothing but chocolaty water, I started hiking along the river's edge on a non-maintained trail that the Park Ranger told me exists if I looked hard enough.  It weaved down to the sandy banks, and up rocky outcrops, but paralleled the river for two miles until the Deer Creek trail, the second half of my loop back to my car.

The hiking was enjoyable, a combination of downclimbing, boulder hopping, and deep sand.  I kept my eyes on the river, hoping to catch sight of something, but mostly I was trying to hustle to get to Deer Creek in case his group was already there.  At the edge of my shade, I stopped to swap to a long sleeved shirt, drink some water and snack, and check my maps.  In a quarter mile, my trail would cut up above the river and stay high until the Deer Creek drainage.  Just as I started hiking, I glanced back and spotted a group of dories!  I started jumping down the rocks to get closer to the edge and got there as the first boat floated past.  I stayed there waving at the other boats, and they spotted me, and yelled back "Are you Jason's daughter?" (Jason is my dad's childhood nickname; it's confused me my whole life that "Jason" isn't a normal nickname for John)  BUT it was his group! He had been in the first boat and hadn't seen me!  One of the other boats swung over to my shore, tossed me a spare life jacket and said that I could jump on the gear boat and they would give me a lift to the takeout at Deer Creek where they were stopping to hike to the falls and spring.  I hike a lot, but I don't get to float down the Colorado very often, so of course I jumped on!

I felt like a little kid, high up on the rubber walls of the "mothership" enjoying the float as we went down one of the thinnest points of the whole 277 miles of the Grand Canyon. As we motored down to get to the take out first, we snuck up on my dad's boat, and the look on his face was priceless when I called out "Hello!" He had hoped that I could make it work, but knew that it was pretty unlikely, so to sneak up on the river and surprise him like that was better than I could have ever expected.

We spent most of the day together, hiking up the slot canyon, hanging out with his rafting family, enjoying the shade and fresh water swimming. I got to hear about the previous days of their trip, the giant rapids filling the boats, and the side canyons they had explored.   Everyone was happy and healthy, and it was a perfect day hanging out in a beautiful place.  As the afternoon was rolling in, they loaded back up in their boats and headed for their camp, just down river on the opposite shore. They offered to include me, and it was tempting, but I wanted to be off hiking early the next morning so my face didn't melt off on the climb out of the canyon. As I hiked up Deer Creek canyon away from the Colorado I  couldn't help but be elated about the fact that it worked out. It went better than I could have ever imagined, and continued the tradition of adventures my father and I end up on. The  bar was set pretty high this time, not sure how we can top this one, but right now I'm just basking in the joy of pulling it off. :) 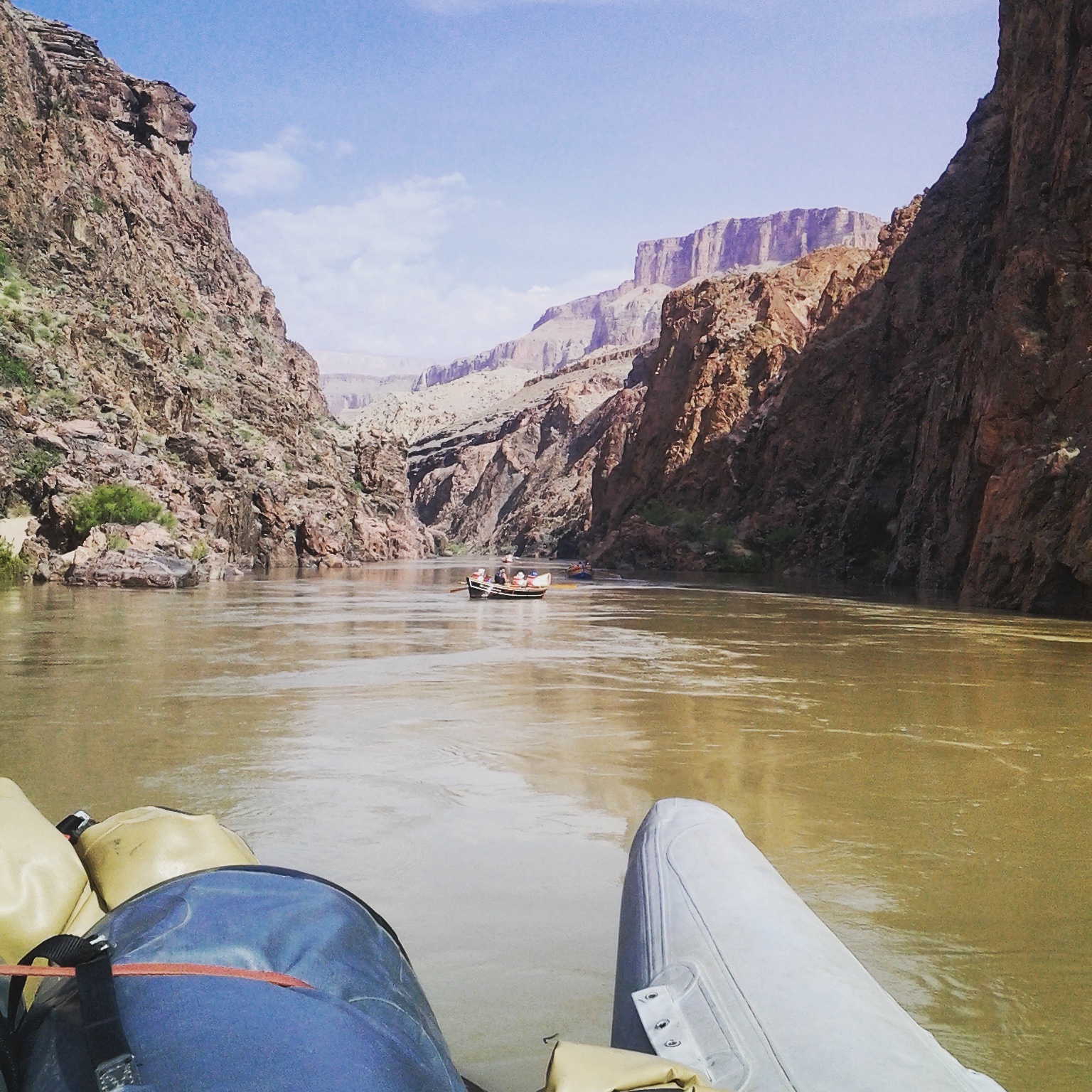 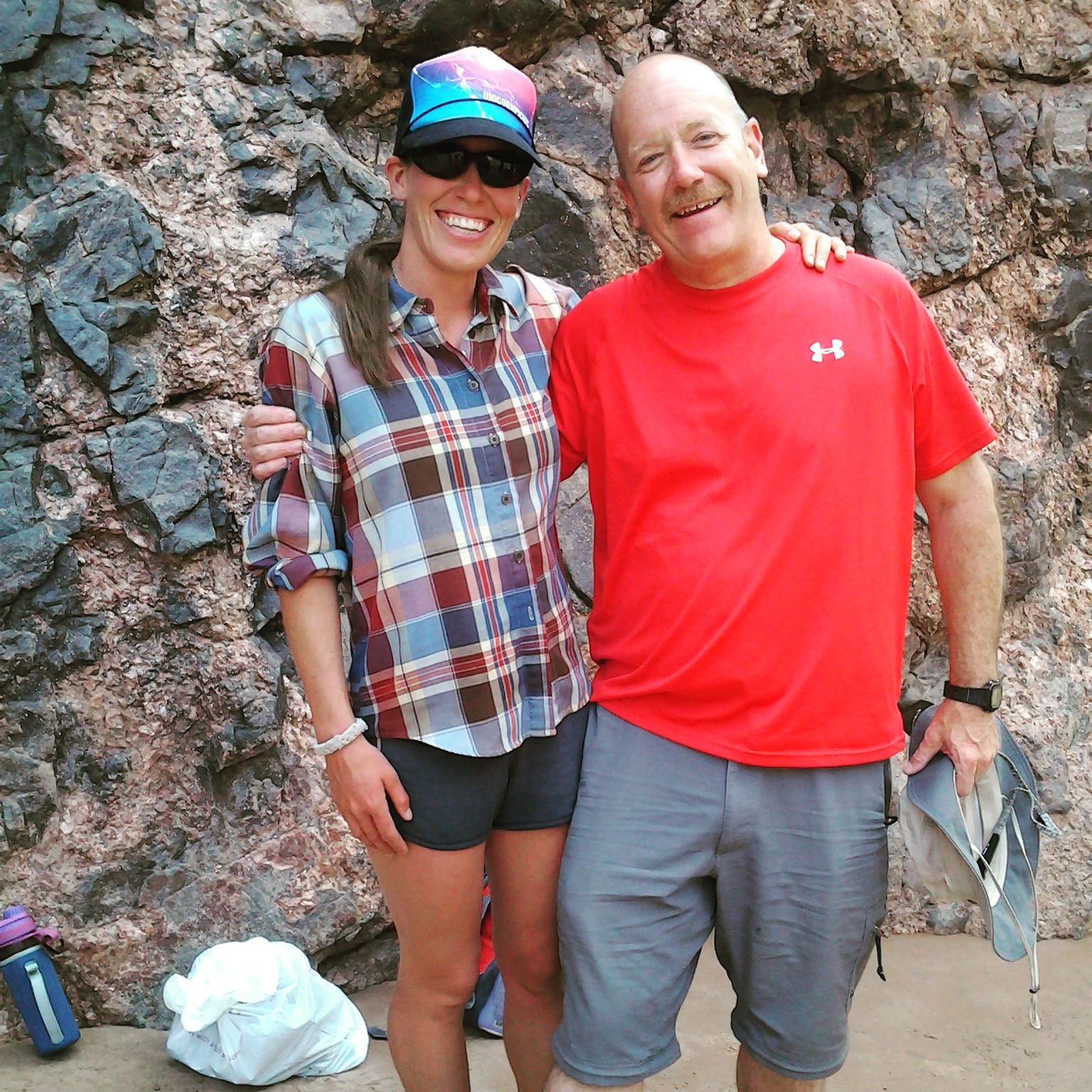 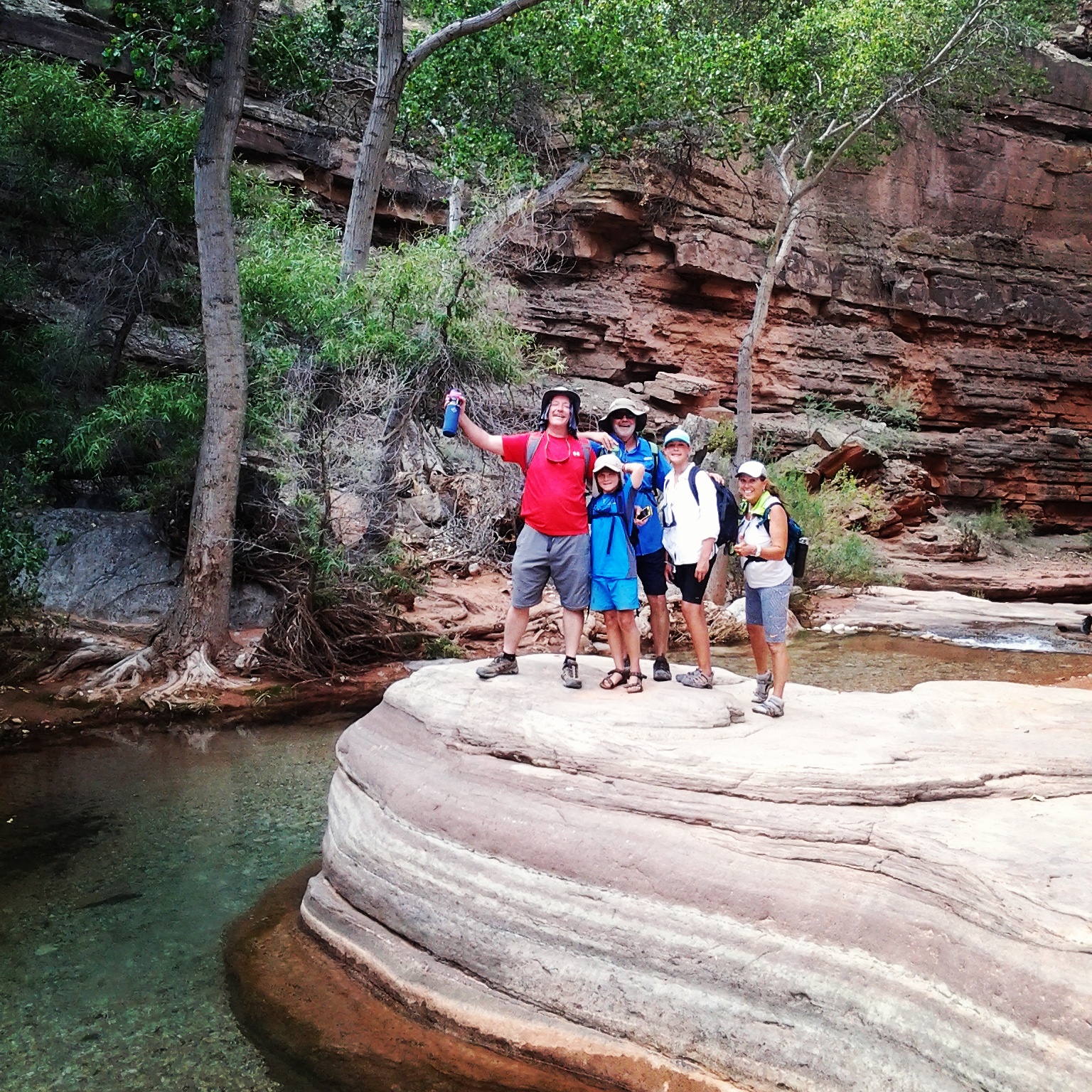 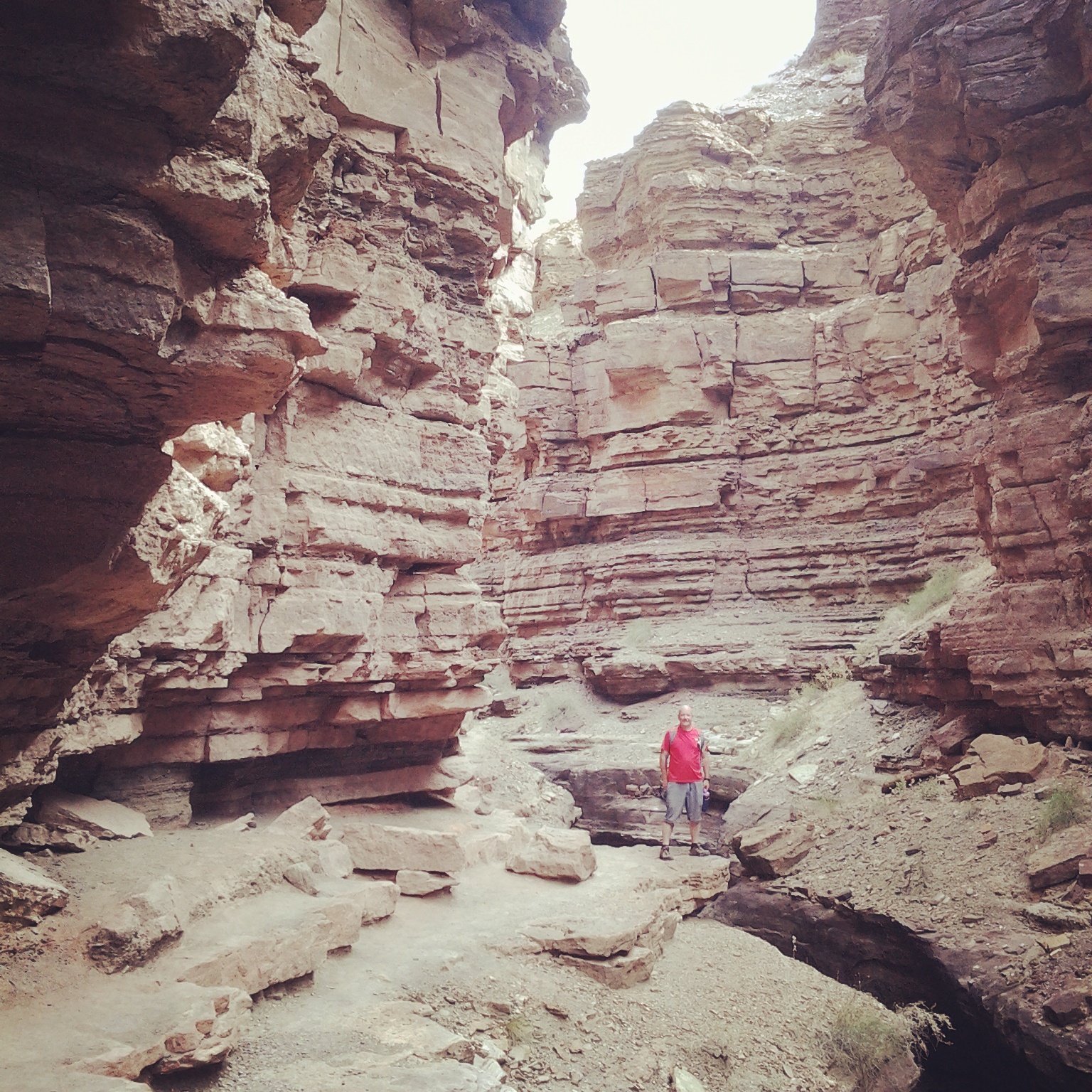 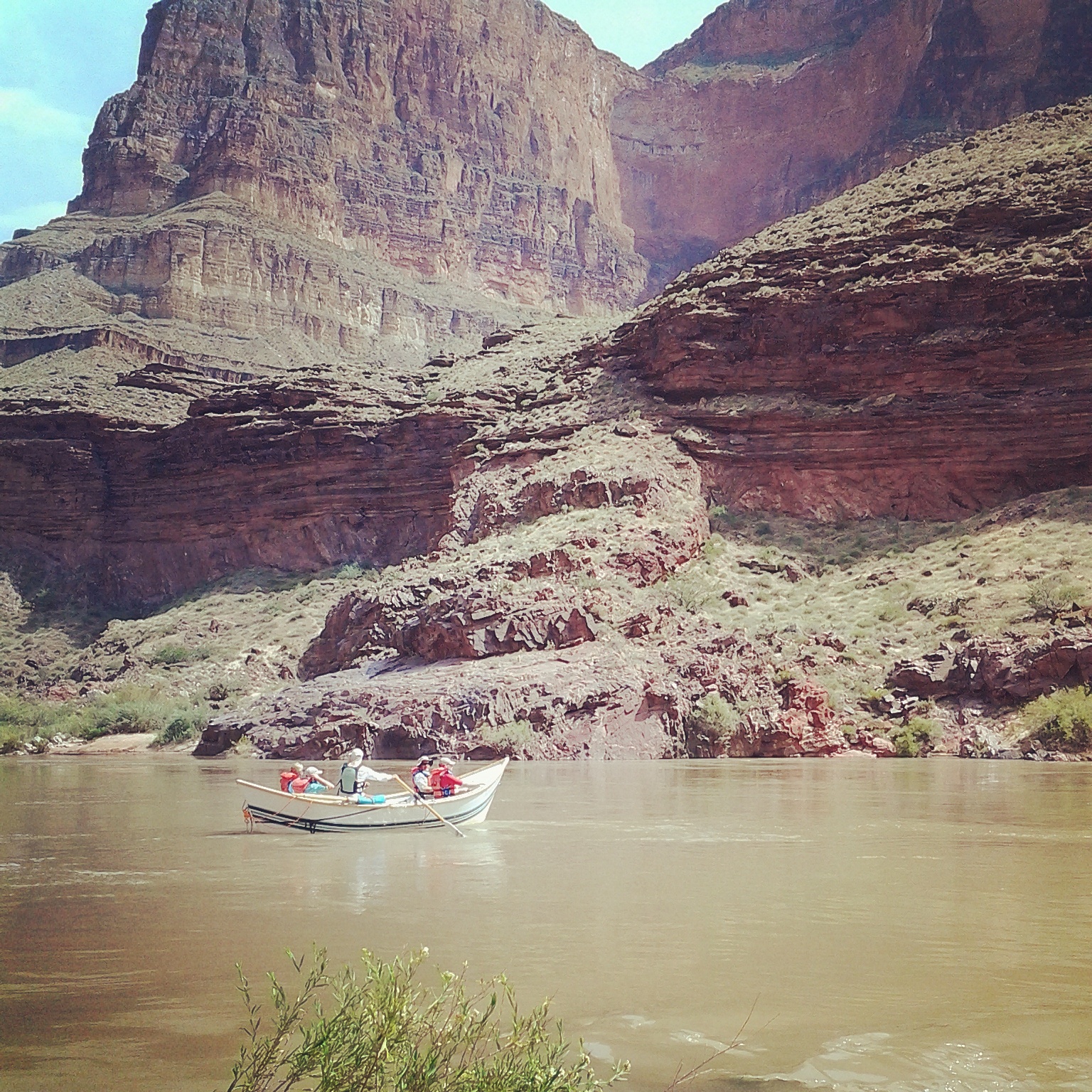