fake it til you make it!!

So many of you are aware of the fact that this winter I transferred from my old department at the Canyons to a new one.  Daycare to Ski School!  This was an awesome plan- more time outside, a lower ratio of kids to me, new uniform, shorter work days, and even the possibility of attaining a goggle tan!!!

There was only one minor issue.

I didn't know how to ski.

So here's the background.  I had skied twice before.  2 times.  Every other time I had been on snow I had been strapped sideways to a snowboard.  And that being said, I'm a good snowboarder, and will ride any terrain, not always making it look pretty, but I have gotten to a stage of riding where I don't bother evaluating terrain before heading down it.  I can always enjoy a way down.

I interviewed for the position and casually downplayed my experience as a skier, trying to highlight my phenomenal skills with working with kids.  The whole reason I wanted to be a ski instructor instead of snowboard is because 95 out of every 100 kids between 4 and 6 will learn to ski.  Most kids that age don't have the core strength or balance to snowboard.  So if I wanted to instruct young kids, I needed to be hired on two planks.  And hire me they did.  Probably didn't hurt that two of the bosses have had children in the daycare with me for the last two years, but ski skillz were definitely lacking...

Walking into the ski swap, I should have been wearing a sign that stated "Take this idiot for all she's worth" but I think I walked out with a good set-up.  I was honest with the guy helping me and told him that I didn't know anything about rocker, camber, dins, widths, or stiffness.  He laughed at me.  But 500 dollars later, I walked out with a brand new set of purple skis, bindings, boots, and poles.  I have since discovered that my boots are way too big, but it was hard to transition from the comfort of snowboarding boots to ski boots, and now that I have learned to ski correctly, I understand the concept of leaning forward a little better.  Maybe next year I will downsize, but I am over my budget for equipment this year! 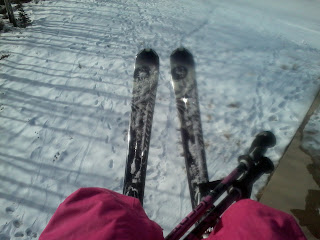 I squeezed in a few more days of skiing before training started.  Decked out in Burton snowboarding gear, sitting in the backseat of my skis, and generally being out of control for 75% of the time, I felt ridiculous.  Fear of being fired during training crossed my mind.  Thankfully the trainer, who had a not-so-secret crush on me, spent a lot of extra time ingraining better habits in me.  If nothing else, I hadn't been skiing long enough to have years of bad habits, only days! It sucked being the weakest member of the group, but I'm glad I stuck through it.

At the core of it all, it was really hard to learn something new.  I'm a very competitive person- I have a hard time letting a 3 year old win.  And to be out there, and be bad at skiing, when I could be good at snowboarding was a really difficult thing to grasp.  I felt so self-conscious, as if everyone on the mountain knew how bad of a skier I was, and knew that I was a complete fraud as a "Professional Ski Instructor." But by taking on this job, I forced myself to learn a new skill that I had previously rejected, and it was a good reminder that there should be no end to learning.

As soon as work started, I immediately requested to only work the 6-and-under kids, and expressed interest in working with the beginner skiers, a position most often viewed as punishment.  I wasn't trying to brown nose or suck up, but simply didn't want to try and instruct kids at a higher level than myself!  It is exhausting work, and as the season is winding down, I have only ridden the actual chairlift twice since the majority of my groups aren't strong enough skiers to leave the magic carpets and make it down the bunny slope.  Some days I spend more time walking up the hill in my skis than down, and a good portion of my days are spend comforting and wiping tears away.  But I love it.  I think of myself less as a Ski Instructor and more of a Child Instructor.  And some days my group of 3 skiers swells as upset satellite children slowly gravitate to my group.  We have snowball fights, squawk like pterodactyls, make team names, and occasionally learn to ski.  I try and make it my goal, each and every day, that we have fun.  Skiing comes second, because if it isn't fun, what 4 year old will want to come back for more? 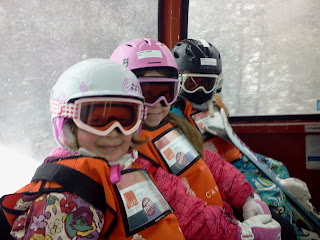 And here we are now, the season rapidly coming to an end as a few more inches of base snow melt every day.  This year has proven to be nearly as bad as last year's record setting horrible season. I've probably managed 35 days on skis, a decent number for the majority of the world not living in a ski town.  Many of them are spent on the magic carpet instructing, but I have started to enjoying taking the skis out for fun when the conditions aren't great for snowboarding. I still fall now and then, including a fantastic binding ejection, in uniform, on the magic carpet, that left me on my face, but I have also learned how to hit small jumps, and enjoy the feeling of my skis leaving the snow.  And in one awesomely ironic day, the father of the kids I nanny took me out for a ski lesson while his son went out with a family friend, who just so happened to also be a Canyons ski instructor (but one that knew how to ski).  I have suffered my way down black diamond moguls and nearly split myself around a tree cartoon-style.  But I learned how to ski.  :) 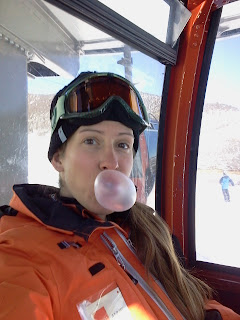