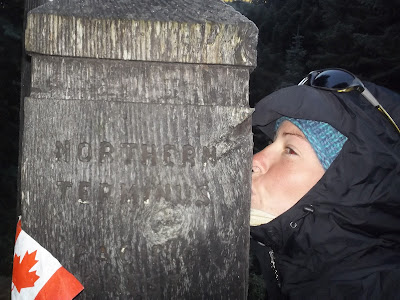 I’m sitting on my flight from Seattle to San Diego, and its just hitting me now that this adventure is over.  People that I have spent the last 5 months of my life with have all gone their respective directions.  Chances are low that I will every see the majority of them again.  Many didn’t even get a proper goodbye, and yet with these 100 or so folk, I have been early-morning cranky, ecstatically happy, and amazingly frustrated and we did something awesome together.  Some are headed back east to the colors of fall, or maybe starting out in a new favorite place along the trail.  Or just back home to take a breather before diving back in the matrix headfirst.  In a way I am incredibly envious of those that have an idea of what their headed to.  I don’t really have a plan next, and while that seems like a very typical “Annie” thing to do, it can be a little exhausting when it happens every 6 months or so.  Maybe I will want to settle down a bit and take it easy for a while and see how the majority of people do things.

Then again, probably not.

I’d be lying if I said that I hadn’t thought about getting back out there.  I’ve already evaluated my gear, and started the planning for a thru-hike of the Continental Divide Trail.  At around 3000 miles, it’s the biggest of the three, and with a slogan along the lines of “Embrace the Brutality,” it has a reputation for kicking asses.  Um hey CDT, I already had my butt kicked by the AT and the PCT, apparently I enjoy it.  But lets not get ahead of ourselves.  I haven’t even really started to celebrate yet! 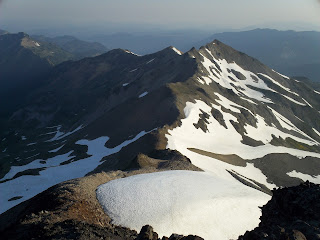 At approximately 6:30pm on September 28th, I hiked across the border of Canada and Washington State.  It was 5 months and 6 hours from when I last stared at the Mexican border from behind two fences and thought to myself “Okay, let’s go to Canada.”  My shirt was still dark purple, not yet bleached from the sun and the sweat; sitting here with it on now, it’s a light brown-purple shade, dotted with holes, and so threadbare that I am amazed it doesn’t tear with I put my pack on.  I started the trail in decent shape, but the 15 lbs or so that I have lost of the last 5 months are noticeable, from the fact that my spandex fall off, to the sharpness of my pelvic bones and the visible ribs in front and back.  During my weekend in Seattle I attempted to eat and drink my body weight, but its not an easy process to reverse.  Towards my last few weeks of trail, I had to eat about every hour while hiking, and if I didn’t, my body generally reacted like it was going to absolutely shut down on me and stop moving.  That level of hunger is incomparable to anything I’ve experienced before. 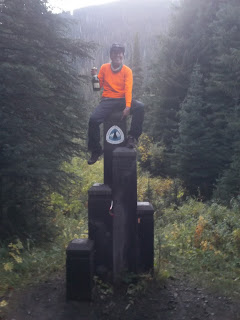 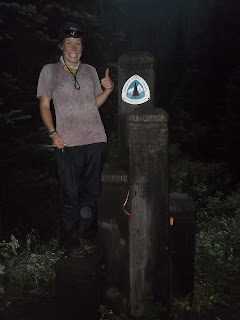 The last few weeks were especially difficult for a few reasons, mainly the terrain and weather changed drastically.  I won’t complain too loudly, or thru-hikers from past years might hunt me down and smack me over the head, but in the three weeks that I hiked through Washington, I saw more rain, snow, and cold temperatures than any other section.  And the first week was sunny and 90 degrees.  Typical weather for the Washington section is cold and wet the whole time, so I really appreciated the good weather when it was around, but it didn’t change the fact that when it decided to drop, I was constantly on the verge of exposure and using ultra-light gear in below freezing temperatures, precipitation of every form, and grinding days with huge amounts of elevation.  In order to finish 5 months to the day, I had to push a 33-mile day in rain and fog in 11 hours, then followed it with a 20 mile day when I became hypothermic and slept in a pit toilet, then two 30 mile days back to back.  And if you don’t know what a pit toilet is, you don’t want to know.  If you do know what a pit toilet is, it was atleast clean smelling-ish, large enough to pitch my tent inside, and I was able to combat hypothermia…you’d probably make the same decision.  I hiked over a 7000ft pass where on the climb I experienced every form of precipitation from mist to snow as I gained elevation.  And I finished the trail on a beautiful bluebird day in which I was still able to look around and think “I’m going to miss this.” 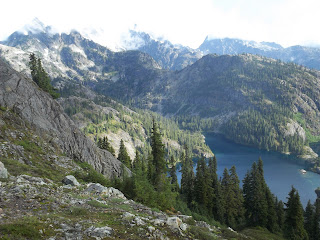 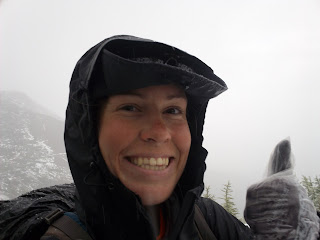 I hiked those last few days alone, only crossing with another girl as we leapfrogged each other through the day.  Oddly enough we started our hikes the same day, but never hiked together as our styles didn’t mesh well, but in the end, we were together at the monument and it was nice to have someone else there.  I carried a bottle of champagne roughly 180 miles to celebrate with, and we were able to get some good pictures, then drink the remainder of what we didn’t spray.  We set up camp near the border, then in the morning I returned to the monument to take a few last photos and have a little more time there before getting back on the trail and finishing the last 9 Canadian miles to the lodge in Manning Park.  The first thing I did when I got there was throw away my shoes.  The last 250 miles of the trail my shoes were wrecked and I was in excruciating pain, but with a steady diet of Ibuprofen and no options, I made it.  A few other really good friends had finished the night before and we loaded up on the Greyhound together and began the really fast return to society.  I hadn’t showered in about a week and the combined stench and sitting in a bus for 7 hours to make it to Seattle were fairly rough on my queasy stomach.  But I think everyone else was also struggling with how bad I smelt so I wasn’t alone! 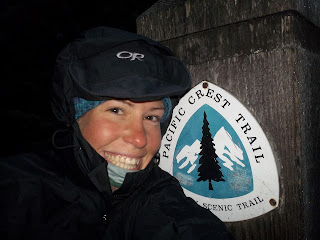 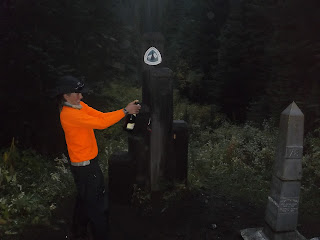 The last 4 days in Seattle have been incredible.  I was staying with a good friend and essentially had no worries or concerns all weekend.  The biggest dilemma I had to face was figuring out if we wanted to do another round of drinks, or go to a new bar.  I spent most of the weekend with Topshelf, another thru-hiker that finished about a week before me, and we were able to meet up with Stumbling Goat and Thumper, two of my favorite trail angels/thru-hiker/people from the trail.  I watched college football, NFL, random movies, and ate a lot.  Waffles and burger were a reoccurring theme, but cupcakes made an appearance, along with bloody mary’s, and both were readily devoured along with anything else placed in front of me!  I was a couch dweller, on anyone’s available couch, and got to see some of the cool places of Seattle while hanging out with Topshelf.  He even took me on the ferry, and while his 7-year old niece might have ridden it ‘like a hundred times” as she told me, it was my first, and I was super excited.

But here I am, currently a few minutes from landing at LAX, and somewhere out my east-facing window are mountains that I hiked through over three months ago.  The green valleys and peaks of the Pacific Northwest have dissolved away, and the tan color of the desert is back beneath me.  And I’m not sure that I will ever be able to look at it the same. 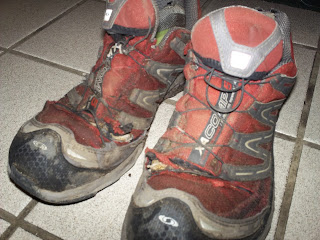 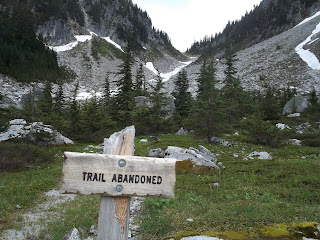 (this isn't exactly an up-to-date posting, but I was busy celebrating and seeing friends...sorry dad!)
Posted by Annie Mac at 5:02 PM No comments: